Cancer all-clear for night work was based on ‘bad science’

Posted on December 15, 2016 by wildcardenvironmentalist 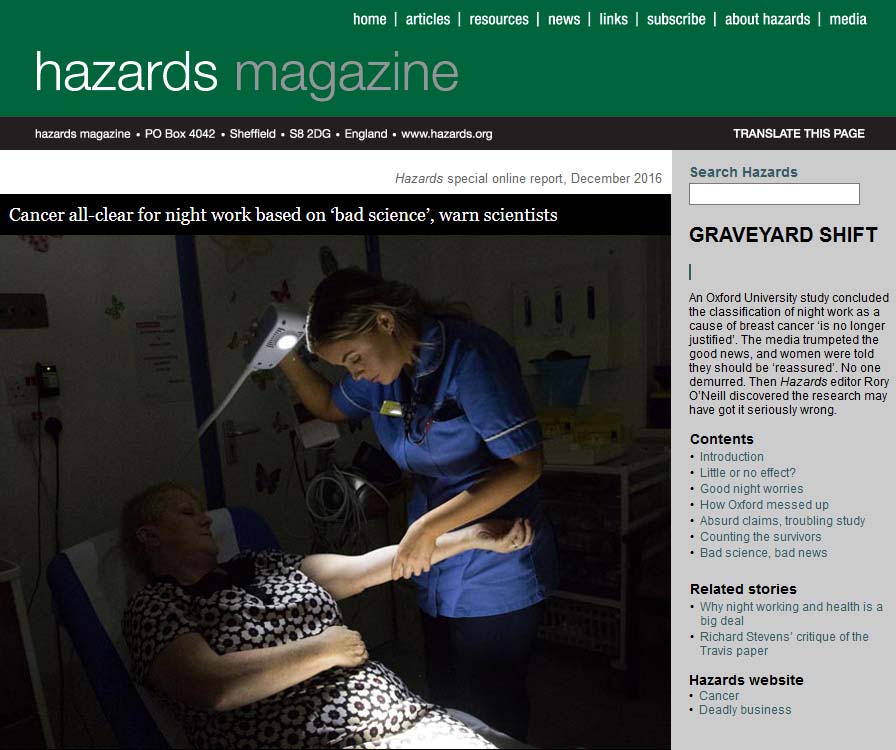 An Oxford University study that concluded the classification of night work as a cause of breast cancer in women is no longer justified was based on ‘bad science’, top researchers have warned.

The large scale ‘meta-analysis’, published online on 6 October 2016 in the Journal of the National Cancer Institute (JNCI), concluded “night shift work, including long-term night shift work, has little or no effect on breast cancer incidence.” It added the International Agency for Research on Cancer’s (IARC) ranking of night work as a ‘probable’ cause of breast cancer in women “is no longer justified.”

But three of the most respected epidemiologists on night work and breast cancer have now said they “fully disagree” with this conclusion, noting a succession of methodological flaws in the research “invalidate” its conclusions.

Harvard Medical School epidemiologist Eva Schernhammer told Hazards magazine that given the Oxford study’s “bad science”, it was “not surprising” it found no effect. In a detailed criticism of the paper, published online on 15 December, she said the JNCI paper’s many shortcomings “preclude it from making the conclusion that there is no association between night work and breast cancer risk.”

Johnni Hansen, a researcher with the Danish Cancer Society, was equally unimpressed. “They base their conclusion on a poor study, but even worse is that their conclusion may hinder preventive initiatives for night workers,” he said.

Richard Stevens, of the University of Connecticut medical school, who has written influential papers on the topic with both Schernhammer and Hansen, was blunt. “Why was the paper written in the first place?” he asked.

The main cohorts in the Oxford study, which was financed by the Medical Research Council, the Health and Safety Executive (HSE) and Cancer Research UK (CRUK), were “worryingly old”, with many over retirement age, and the follow up was “unusually short”, Hansen said.

The risk of women developing breast cancer appears to wane in the years after night working ends, so studying retired workers without recent exposures misses the point and the cancers, said Schernhammer. She said the higher risk is seen in women with long exposures ­ at least 15 years ­ early in their careers. Hansen added the authors behind the JNCI study should have recognised the possibility of ‘truncation bias’ in their analysis.

Night work was sometimes defined so loosely in the study participants, a single night shift might have seen a worker added to the ‘exposed’ group despite facing minimal exposure and risk. The JNCI paper also discounted case-control studies and those exploring the mechanism behind a possible association. According to Stevens, the JNCI meta-analysis “excluded case-control studies, of which there are many, for no good reason.”

He added that studies considering the biological mechanisms give a valuable insight into why and where you might look for an association. Understanding the process, something integral to his own research, was important, he indicated.

Stevens, Schernhammer and Hansen, together with Scott Davis, a professor of epidemiology in the University of Washington’s School of Public Health, are the stand-out epidemiologists on night work and breast cancer.

Not one of them was asked to review the paper. “We are the four epidemiologists who have been working for by far the longest on the epidemiology of night work and breast cancer,” said Stevens, who is dismayed the Oxford study, led by molecular epidemiologist Ruth Travis, found its way in to a high visibility journal like JNCI.  “Any of the four of us would have quickly noticed the severe flaws of the Travis paper and pointed them out to the editors of JNCI.”

He said it was “absurd” that the night work association with breast cancer was being dismissed on the back of a “troubling” paper by “a distinguished group of experienced researchers who should have known better.”

The JNCI study’s lead author, Ruth Travis, declined an invitation from Hazards to address the detailed criticisms of the study.

← This breast cancer month, we need to ask why are we still ignoring the elephant in the room?
Endocrine Disrupting Chemicals — One more way CETA endangers public health and the environment. →